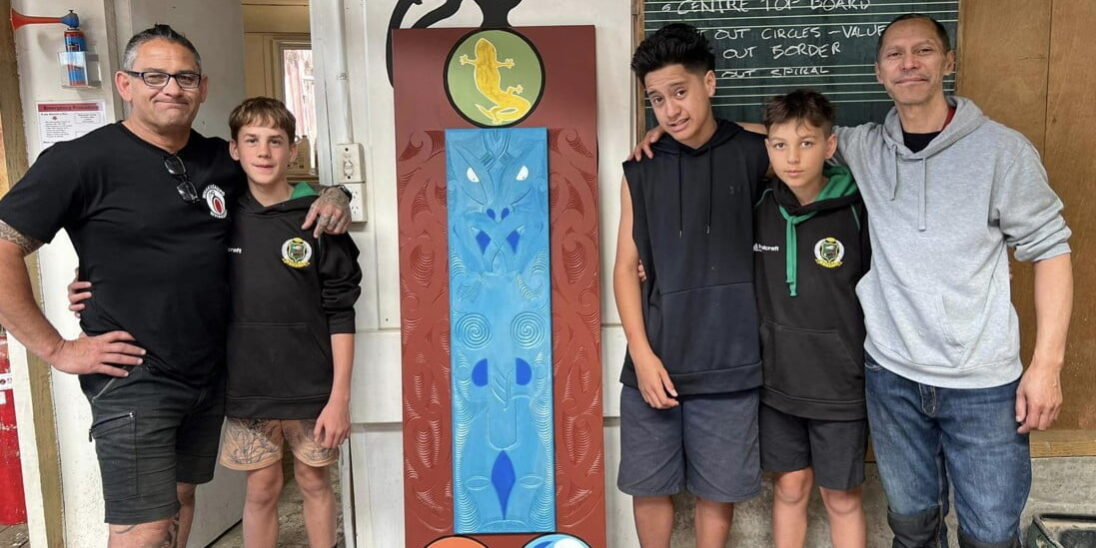 Three tamariki tāne, Coby, Dayton, and Charlie from Pegasus Primary School called us up the other week with an idea.

As it was coming to their last days of primary school, they took it upon themselves to find a way to symbolise their friendship before they take on high school. On their own initiative, they reached out to us to create a whakairo piece which would stand on the grounds of their memories, their legacy as mates, and their Tūrangawaewae. To give you an idea, it’s 70 kilometres from Pegasus to Whakaraupō, but the boys were resolute in letting us know they’d make it.

Over the last week, they came up with a design, centred on their relationship to Tangaroa and the local moana and awa. Their primary school is nestled near the grounds of Kaiapoi pā, one of the biggest pā sites to exist in te Waipounamu. The awa and moana connect the tauira together, symbolising their kura and whare wānanga values where the piece now resides, putting mana back into the whenua.

Tamariki like Coby, Dayton, and Charlie really remind us to think big despite the obstacles that are in front of us. Their whakairo on the other hand, reminds us to think human, to get outside and create memories that we take with us for life.

Mauri ora boys, all the best at high school.

The monarchy is not your friend: a commentary on Aotearoa
26 September 2022